Guess who just dropped in for a chat!

David Edgington (who along with David Butcher) started E.B.Spares back in 1969, hence “E.B.”.

Here is a link to a youtube video showing the first start since the 1950s,

He has also been busy with the word processor writing for Stationary Engine Magazine, and has also written some 15 books on the subject. 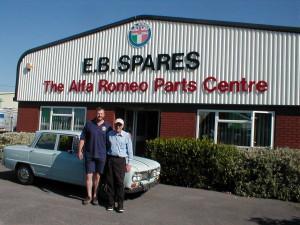 He was also telling me that he had a great day at the Classic show at Sherborne where his 1967 Giulia Super was very much admired.